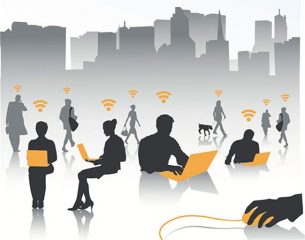 Wi-Fi hotspots and wireless LANs are options for wireless Internet connectivity, it is typically delivered to a network hub via a wired connection like satellite, cable, ADSL, fibre optics, Satellite Internet or VSAT and then made available to wireless devices via a wireless access point. Let’s look into Satellite, VSAT Internet for business

What Is VSAT | What’s Are the Specifications

VSAT is a very small aperture terminal a two-way satellite ground station with a dish antenna that is smaller than 3.8 meters. The majority of VSAT antennas range from 75 cm to 1.2 m. Data rates, in most cases, range from 4 kbit/s up to 16 Mbit/s. VSATs access satellites in geosynchronous orbit or geostationary orbit to relay data from small remote Earth stations (terminals) to other terminals (in mesh topology) or master Earth station “hubs” (in star topology).

VSAT Day to Day Uses
VSATs are used to transmit narrowband data (e.g., point-of-sale transactions using credit cards, polling or RFID data, or SCADA), or broadband data (for the provision of satellite Internet access to remote locations, VoIP or video). VSATs are also used for transportable, on-the-move (utilising phased array antennas) or mobile maritime communications, it’s ideal for use in organizations that require uninterrupted internet access at all times i.e. banking institutions, online trading platforms, internet communications companies or even personal home internet can be in the form of a VSAT connection

How Satellite Internet Works | Business Benefits
Generally it relies on three primary components: a satellite, typically in geostationary orbit (sometimes referred to as a geosynchronous Earth orbit, or GEO), a number of ground stations known as gateways that relay Internet data to and from the satellite via radio waves (microwave), and a small antenna at the subscriber’s location, often a VSAT (very-small-aperture terminal) dish antenna with a transceiver.

“The Business Benefits use of a VSAT and Satellite Internet are instant, internet access to business is from any location, ensuring business continuity through stable internet connections”